At the start of December, the Australian Defence Force (ADF) said "good-bye" to their current troop transportation aircraft, after the all-white Airbus A340-313X CS-TQM departed Brisbane on a flight to Don Muang International (Old Bangkok International) Airport.  It has been reported that CS-TQM will eventually be scrapped. 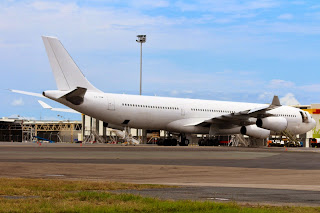 CS-TQM was leased by the ADF from HiFly, a Portuguese-based airline that specialises is charter flights and aircraft leasing.

HiFly was once known as Air Luxor, and the ADF has utilised aircraft from HiFly / Air Luxor since the early 2000's.  One previous Air Luxor-operated aircraft that flew for the ADF - Airbus A330-322 CS-TMT - was captured by me at Rockhampton Airport during Military Exercise Talisman Sabre on 5 July 2009. 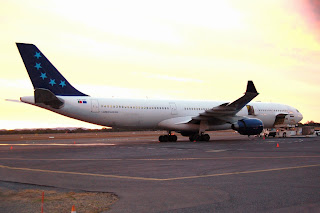 Interestingly, CS-TMT now flies for the Belgian Air Force, and has done so since late-2009.

A340 CS-TQM has operated in Australia for the ADF flying to Middle East at least once a week from Airports all over Australia - from Perth, to Adelaide and Darwin, and right up and down the East Coast of Australia.  Local plane spotter Dave was able to photograph CS-TQM at Townsville numerous times over the years - as shown below from one recent visit. 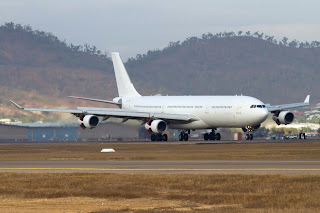 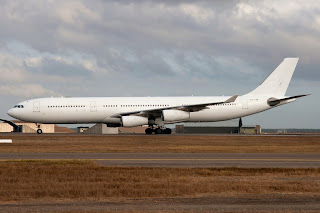 During periods of maintenance, CS-TQM would be replaced by other Airbus A340 aircraft including OY-KBM (which is now in service with Scandinavian Air System - SAS) and CS-TQL (which has subsequently been scrapped).

Most recently, fellow HiFly A340-313X CS-TQY has been ferried into Brisbane and has commenced operations with the ADF, continuing the weekly charter flights to the Middle East.  Brisbane-based plane spotter Brendan B has sent through a couple of photos of CS-TQY as it rested at the Old International Terminal Building (OITB) at Brisbane Airport shortly after its arrival into the country. 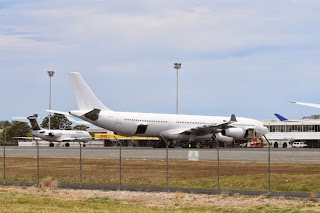 Finally, one of Brendan's other recent photos from Brisbane that features CS-TQY also features another interesting large aircraft that was leased by the ADF.  The Boeing B747 in the striking blue and silver livery was in fact being utilised by the ADF to transport equipment back home from the Middle East.  The aircraft was National Airlines Boeing B747-428(BCF) N919CA. 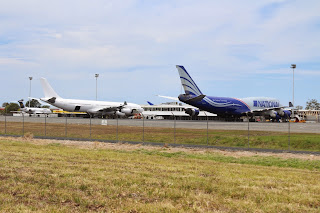 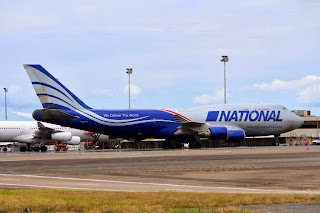 Certainly a lovely looking aircraft, and a real treat for Brisbane plane spotters to capture such a rare movement.  I believe this was only the second visit of a National Airlines B747 freighter into Brisbane.

If only we had more like this Central Queensland!!

Sincere thanks to Brendan and Dave for sending through their great images and allow me to share them with you!!

Photos taken by Dave and Brendan Berry ©
Posted by Damian F at 9:22 AM