Qantas Airways Boeing B737-800 VH-VZY Touches Down at Gladstone Airport on Monday - Twice!

This was the first time EVER that a Qantas mainline aircraft had touched down at Gladstone! 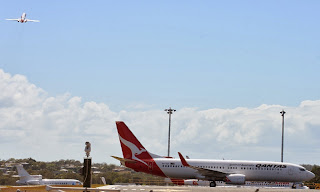 Then around lunch time, VH-VZY returned to Gladstone, again positioning from Brisbane, but as QFA6102.  It later departed back to Brisbane once again, but as QFA1353.

The visit of the Qantas B737 is believed to have been operating a closed charter out of the industrial city - highly likely a Fly-in Fly-out (FIFO) charter given that there is a mass exodus of local resource industry workers from Central Queensland to their homes.

Sincere thanks to local plane spotter Michael F for sending through these fantastic photos of a truly fantastic visitor to Gladstone Airport!

Stay tuned to the CQ Plane Spotting Blog over the coming days for more spectacular photos!

All photos taken by Michael Fleetwood  ©
Posted by Damian F at 9:45 PM