OE-LGX touched down from Sydney, and much to my delight, one of the CQ Plane Spotting Blog's Facebook fans, Thomas K was on hand and captured this image of the lovely Global Express on the ground at Barcaldine. 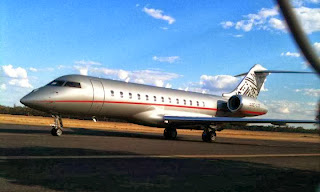 Shortly before midnight, OE-LGX departed Barcaldine for Hamilton Island, where at the time of writing, it remains parked.  OE-LGX was heard to be using the radio callsign of "VistaJet 674".

It's certainly a great thrill to have such a lovely movement through Central Queensland!