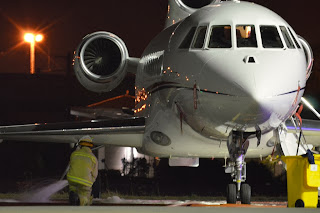 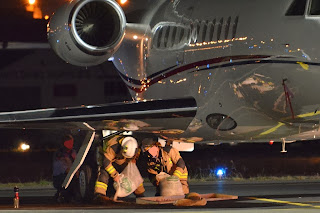 With permission from Gladstone Airport Corporation, local plane spotter Jamie C has sent through some images from late on Monday 23 December showing the Queensland Fire and Rescue Service (QFRS) responding to a small fuel leak from the visiting Dassault Falcon 900EX N47EG.

As the photos show, the drama unfolded after dark when a small fuel leak was detected.  The QFRS went to work spraying foam and laying absorption material over the spill. 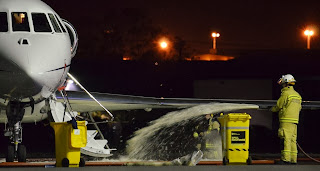 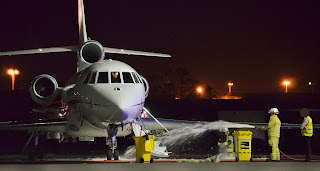 Reports suggest that N47EG was due to depart Gladstone later today - Tuesday 24 December - however whether this occurs now is still to be seen.

UPDATE!  N47EG departed Gladstone at about 3pm this afternoon possibly for Ayres Rock.  There was an ExecuJet Australia Bombardier Global Express - VH-ICV - planned to pop into Gladstone Airport today, however this flight has seemingly been cancelled.

Thanks to Gladstone Airport Corporation for allowing us to report on the evening's events, and thanks to Jamie for capturing these images and sending them through.