Reports have surfaced late on Sunday 15 December that Brindabella Airlines has been put into receivership and its flights suspended indefinitely, after much of its fleet was recently grounded for failing to do timely safety checks. 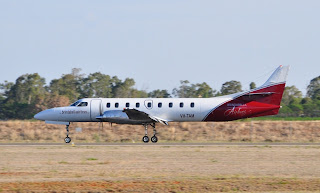 The move affects 140 jobs and the Christmas travel plans of people across Brisbane and regional New South Wales who had booked on the airline's up to 250 weekly flights.

Administrators KordaMentha were brought in to manage the airline after it decided to ground the aircraft not covered by a recent direction by the Civil Aviation Safety Authority (CASA) and to cease passenger flights.

Brindabella Airlines operated a fleet of predominantly BAe J41 and Metro turbo-prop aircraft.  Brindabella Airlines had operated various Fly-in Fly-out (FIFO) charter flights into some parts of Central Queensland including Emerald (as shown above with Metro VH-TAM), as well as Barcaldine and Alpha.
Posted by Damian F at 11:59 PM