A Few Lighties Around Fraser Coast Airports This Week

A little bit of light General Aviation (GA) aircraft action in the Fraser Coast region week with David G of Maryborough Aviation Services capturing and sending through a couple of photos of a couple of visitors to Maryborough Airport on Wednesday 13 April.

After seemingly spending the previous night parked at Hervey Bay / Fraser Coast Airport, Seair Pacific / Istlecote Cessna 208 Caravan VH-LMD departed there early on Wednesday for Wanella Station near Coppabella on a Fly-in Fly-out (FIFO) charter flight.  It then called into Maryborough Airport (as shown below) before being later noted departing Lady Elliot Island for Redcliffe and the Gold Coast. 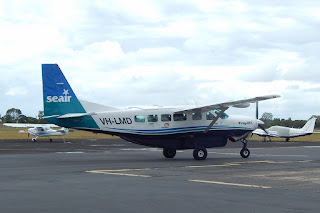 BPW Aviation of Scone, New South Wales, Cessna 441 VH-EQU was also spotted calling into Maryborough Airport on Wednesday 13 April.  As mentioned on the CQ Plane Spotting Blog below, VH-EQU has visited several Central Queensland Airports including spending the night at Gladstone Airport on Tuesday 12 April.  After spending the night parked, it looked to depart Gladstone for Bundaberg before calling into Maryborough.  Its exact movements are not known but it looked to continue further South. 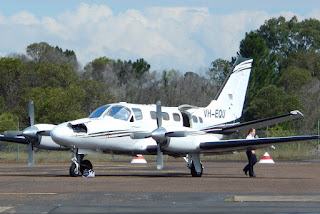 Also flying between the Fraser Coast and Gladstone this week was SOCATA TBM700 VH-VSV which flew into Bundaberg from Archerfield, before continuing North to Gladstone on Thursday 14 April.  It later returned to Bundy and spent the night.  VH-VSV returned to Archerfield from Bundaberg Airport on Friday 15 April.

Another couple of interesting lighties that were also noted at Bundaberg Airport on Friday 15 April included McNab Aviation Cessna 414A VH-FKH visiting from Toowoomba and Archerfield, while Parkes (New South Wales) based AFS Charter Piper PA-31 Navajo VH-CYV called into Bundy from Lake Cargelligo and Moree.

Noted calling into both Maryborough and Bundaberg Airports (amongst other locations) at different times during yet another busy week of flying was the Queensland Police Service (Airwing) Raytheon B1900D VH-PSK.

Finally, it appears that (now former) Bundaberg-based air charter company, Cromair, has relocated operations from Bundy to the Gold Coast.

Ironically, as this news surfaced this week, their Cessna 414A VH-CBT actually called into Bundaberg Airport from the Gold Coast during the afternoon on Friday 15 April.  Cromair's Facebook page also indicates plans to then relocate to Canberra, A.C.T. in May 2016.  See more at:
https://www.facebook.com/Cromair/

Photos taken by David Geck and Col  ©
Posted by Damian F at 9:38 PM