On Wednesday 27 April, Gulf Coast Aviation Cessna 510 Citation Mustang bizet VH-KXM was noted calling into Longreach Airport once again while on a journey North on from Bankstown to Vanrook Station near Normanton.


Also touching down in the Central West hub on Wednesday 27 April was a pair of Dick Lang's Dessert-Air Safaris' aircraft in the form of Beech B200 VH-ODI and Piper PA-31-350 VH-ODE.  Both looked to arrive from Innamincka. 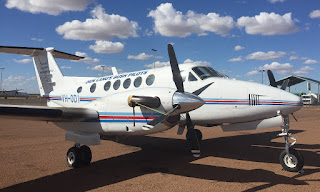 It appears they may be returning 'home' to Adelaide after VH-ODI was noted passing through Longreach over the weekend, arriving from Innamincka on Saturday 23 April and departing to Birdsville on Sunday 24 April.

In fact, at the time of writing, both VH-ODI and VH-ODE are scheduled to depart Longreach Airport for Birdsville early on Thursday 28 April.

Finally, this week, General Aviation Maintenance (GAM) AeroCommander 500-S VH-UJN has picked up the weekday Emerald to Barcaldine to Longreach and back freight run and it made its first visit to Longreach Airport on Tuesday 26 April.