One of QantasLink (Cobham Aviation) newest Boeing B717-200 jets has made its first visit into Central Queensland on Thursday 7 April with VH-YQY operating into Hamilton Island Airport from and back to Sydney as QJE1572/1573. 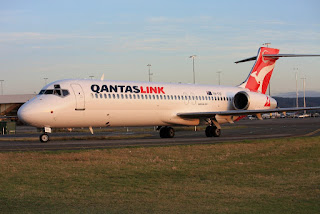 Qantas now flys daily to Hamo from and back to Sydney with a mix of Boeing B737-800 mainline aircraft and the smaller Cobham Aviation-operated QantasLink Boeing B717-200 jets.

VH-YQY was delivered to Cobham Aviation in Adelaide (as shown above) in late January.  It positioning to Brisbane in mid-March and entered service with QantasLink on Tuesday 22 March.

Of interest, Cobham Aviation has also taken delivery of another Boeing B717-200 VH-YQX at Adelaide in early February but at this stage, I don't believe it has entered service.

Both aircraft join the other five QantasLink B717 aircraft that have a 2-class configuration with 110 seats, along with Q-Streaming - Qantas' wireless entertainment system.  These aircraft are fairly regular visitor to Hervey Bay (Fraser Coast) Airport with now the occasional visit to Hamilton Island.