The latest of seven QantasLink (Cobham Aviation) Boeing B717-200 jets has made its first visit into Central Queensland on Saturday 23 April with VH-YQX making a surprise visit into Mackay Airport operating from and back to Brisbane as QJE1768/1769.  It was the aircraft's second day of operations. 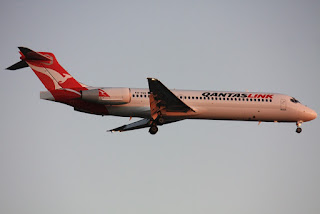 VH-YQX is pictured above arriving into Adelaide Airport in early February at the completion of its delivery flight to Cobham Aviation.  Since then, VH-YQX has only been noted operating one test flight during last week before positioning to Brisbane early on Friday 22 April in preparations to start services later in the day.

VH-YQX joins six other QantasLink B717 aircraft that have a 2-class configuration with 110 seats, along with Q-Streaming - Qantas' wireless entertainment system.  It's visit to Mackay Airport is a little out-of-the-ordinary as these particular aircraft are fairly regular visitor to Hervey Bay (Fraser Coast) and Hamilton Island Airports on flights out of Sydney.