As reported this week, Shell Oil Company (Shell Aviation) Dassault Falcon 7X bizjet VQ-BSN visited Gladstone Airport for the second time this year, this time touching down from Perth and Brisbane just after midnight on Wednesday 13 April.  It had arrived in Perth from Don Muang International Airport in Bangkok, Thailand in the early hours of Tuesday 12 April. 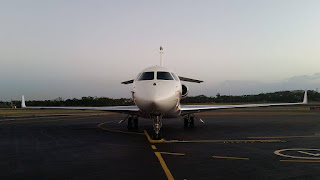 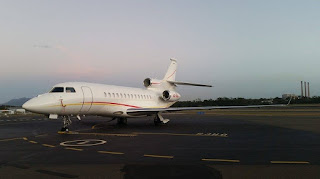 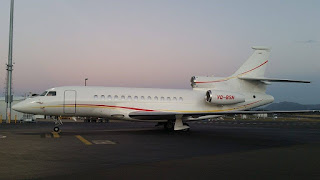 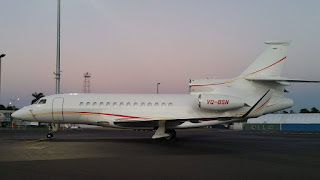 VQ-BSN was then captured by Col still resting on the Gladstone Airport apron early on Thursday 14 April before it departed to Darwin and Bangkok later in the day.

The sleek Falcon was noted using the flight number and radio callsign of 'SHE961'.

Finally, of interest, fellow Shell Aviation Dassault Falcon 7X VQ-BSF also visited Australia this week, arriving into Perth from Al Maktoum Internationl Airport in Dubai in the wee small hours of Monday 11 April.  It too departed overseas on Thursday 14 April, looking to return to Dubai.  It was noted flying as 'SHE963'.

Sincere thanks to Col for taking the time to capture and send through these great photos of a great bizjet visitor to CQ!