Arriving into Emerald Airport on Monday 25 April from Toowoomba the was smart little Vanderfield Pilatus PC-12/47 corporate turbo-prop VH-WPH.  After overnighting, it departed to Bourke and Birchip (Victoria) early on Tuesday 26 April.

UPDATE 1!  VH-WPH has since returned to Emerald Airport on Wednesday 27 April, calling in after a direct flight from Horsham (Victoria).

Also on Monday 25 April, Rolleston-based Cessna 310 VH-XBB flew from Consuelo Airport (South of Rolleston) to Townsville and back to Emerald Airport.

Central Queensland's newest airline, Regional Air, operated a charter from Emerald Airport to Inverell in New South Wales with their Piper PA-31-350 VH-RKD positioning from Mackay to Emerald early on Sunday 24 April.  After spending the night at Inverell, VH-RKD returned to Emerald on Monday 25 April before later returning home to Mackay. 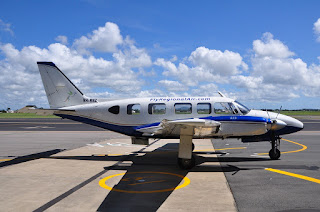 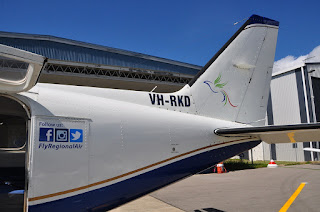 On Saturday 23 April, Australian Helicopters Bell 412EP VH-PXY was noted calling into Emerald Airport for fuel while on a flight from Longreach to Rockhampton.  It has had an interesting few weeks with photos of VH-PXY in various parts around Australia being posted on social media.  I have seen photos of VH-PXY operating out of Adelaide and Darwin in recent weeks.

VH-UJU has been operating the Emerald-Barcaldine-Longreach and return weekday freight flights over the previous couple of weeks since the collapse of the usual provider, Emerald-based Advance Aviation.  It operated its final flight over this run on Friday 22 April.

Meanwhile, VH-UJN operated its first flight on the run to Longreach and back on Tuesday 26 April.

UPDATE 2!  It was interesting to note that fellow GAM AeroCommander 500-S VH-UJI made a late night visit to Emerald Airport on Wednesday 27 April.  It flew in from and then back to Brisbane.
Posted by Damian F at 9:55 PM