Local plane spotters Travis W and 'IAD' were also on hand on Tuesday 19 April as NH Industries MRH-90 helicopter A40-019 called into Rockhampton Airport from the South.  It touched down shortly after the Royal Australian Air Force (RAAF) Airbus A330-203 / KC-30A (MRTT) A39-003 conducted its first missed approach also at Rockhampton Airport on Tuesday 19 April - see below! 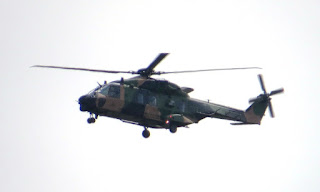 It appears that the MRH-90 was ferrying north to Townsville where that type is in service the Australian Army's 5th Aviation Regiment.  It was interesting to note that A40-019 still wears Royal Australian Navy (RAN) titles on its port side. 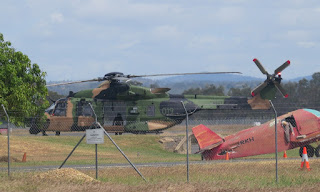 A40-019 was heard to be using  the usually Army utilised radio callsign of "Checker 03".

Thanks to Travis and 'IAD' for capturing and send through these great photos!