Light Jets Australia Cessna 525 Citation CJ1 bizjet VH-TFW has again popped into Central Queensland, touching down at Biloela / Thangool Airport on Tuesday 19 April from its Archerfield base.  On Wednesday 20 April, VH-TFW flew up from Bilo to Rockhampton early in the morning, and it was captured below by local plane spotter 'IAD' as it rested on the General Aviation (GA) Apron. 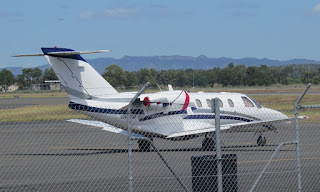 After spending the night parked, VH-TFW departed Rockhampton and returned to Archerfield.

Meanwhile, there has also been a nice variety of light General Avaition (GA) aircraft to be noted calling into Rockhampton Airport this week.

'IAD' also captured a photo of Bishopp Aviation SOCATA TBM-700 VH-VSV also arrived at Rockhampton Airport on Wednesday 20 April from Archerfield.  Later in the afternoon, it departed to Mackay. 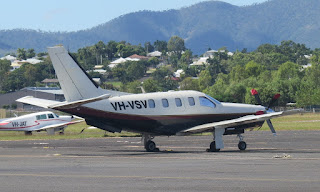 On Thursday 21 April, VH-VSV departed Mackay for Maryborough Airport before returning to Archerfield.

Wagga Wagga based SOCATA TBM-850 VH-PVM was also noted this week at Rockhampton, touching down from Kingaroy on Monday 18 April and departing to Cairns on Tuesday 19 April.