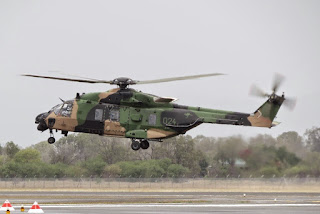 The "Warhorse" callsign is used by B Squadron of the 5th Aviation Regiment of the Australian Army based at Townsville and this is the first time that an MRH-90 has been heard to be using this callsign.  The "Warhorse" callsign had previously been used by Townsville-based Sikorsky S-70A-9 Blackhawk helicopters until their transfer to the 6th Aviation Regiment in Sydney.

A40-024 flew into Rocky from the South and later departed onward to Townsville.