Over the last couple of days it's been interesting to note that a pair of Royal Australian Air Force (RAAF) Beech B300 Super King Air turboprop aircraft have been seen completing airwork at and visiting CQ Airports including Rockhampton. 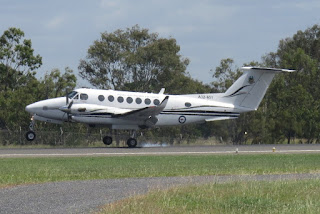 On Monday 4 April, A32-437 was noted calling into Rockhampton Airport from Townsville as "Dingo 31".  It later departed out to sea and then back North to Townsville.

Meanwhile, as shown above on Tuesday 5 April, A32-651 flying as "Dingo 10" was noted flying south also from Townsville and conducted airwork at Mackay Airport before continuing to Rockhampton Airport where it completed a series of touch-and-go's.

Finally, as I was preparing this post late on Tuesday 5 April, RAAF Airbus A330-200 / KC-30A Multi Role Tanker Transport (MRTT) A39-002 performed a missed approach at Rockhampton Airport. Flying as "Dragon 6" the KC-30 looked to head north from RAAF Base Amberley and seemed to head back to the south at the completion of the missed approach.

Sincere thanks to local plane spotter 'IAD' who popped out to Rockhampton Airport to capture the RAAF Super King Air competing its airwork!