On Friday 8 October, a couple of locally-based bushfire flighting aircraft and helicopters were noted operating out of some Central Queensland Airports to fight a fire around the Shoalwater Bay area, North of Rockhampton.
The Bundaberg Airport based Canadian-based Conair Aerial Firefighting Dash-8-Q400MR C-FFQE "Bomber 141" flew up from there to the fire zone and back, completing two water-bombing runs.
Agair Logistics P/L Rockwell Turbo Commander 690B VH-LVG "Birddog 273" led the Dash-8, also flying up from Bundaberg Airport to the fire zone before then later flying to Rockhampton Airport for a refuel.  It then headed back to the fire zone and then back down to Bundaberg Airport with the Dash-8.
Also on Friday 8 October, a couple of helicopters noted flighting the bushfire included Stirling Helicopters Eurocopter AS350B3 Squirrel helicopter VH-EUM as "Firebird 429" which flew up from Dululu to Shoalwater Bay before then landing at Rockhampton Airport.
Plus Emerald-based Heli Central Williams Helicopter Corp (Bell) UH-1H Huey VH-UHH "Helitak 468"  flew to Shoalwater Bay, operating from the Hedlow Airfield, North of Rockhampton. 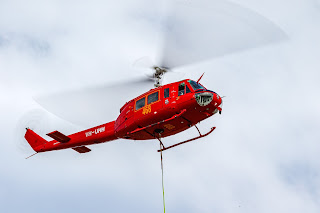 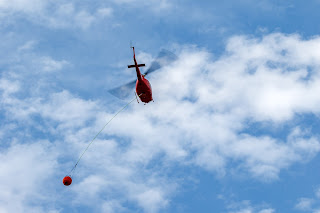