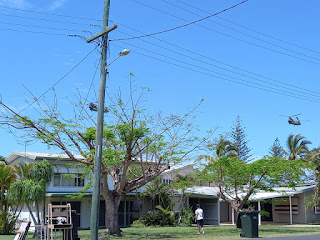 A15-302 and A15-309 departed together as "Chainsaw" and were spotted overflying Bargara near Bundaberg.  They were followed a short time later by A15-310 as "Stockman 362".
After departing Rockhampton, they completed a slow run down the Fitzroy River and over the city before completing a u-turn back over north Rockhampton to then head out via the Northern Tip of the Berserkers and then to the coast.
Photo taken by David Geck  ©
Posted by Damian F at 7:18 PM