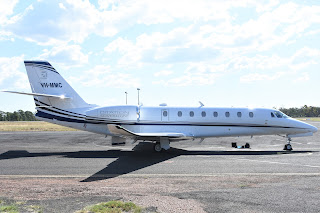 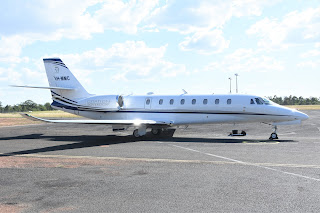 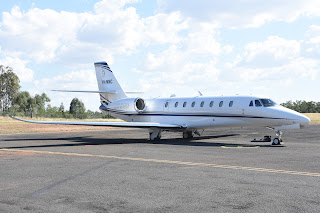 The sleek Citation had earlier touched down from the Sunshine Coast via Brisbane. 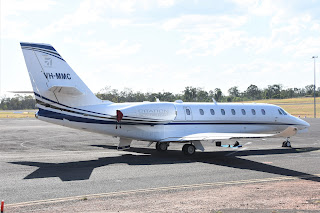 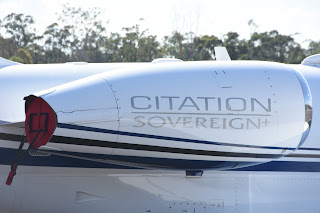 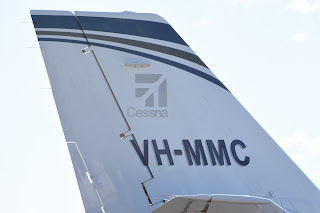 Soon after I took these photos, VH-MMC returned to Brisbane and then the Sunshine Coast.
Of interest, this is the second time that VH-MMC has visited Central Queensland and the 'local' area this week with it also visiting Emerald Airport in the two days prior - see Blog post below.
Another familiar bizjet visiting the region, also on Thursday 28 October, was Brenzil Dassault Aviation Falcon 7X bizjet VH-CRW which visited Hamilton Island Airport from Brisbane.
And Stroud Aviation and Transportation (Boonah) Cessna 510 Citation Mustang bizjet VH-SHI flew across from Proserpine (Whitsunday Coast) Airport to Hamilton Island Airport before then flying back down to Archerfield.
It had flown up to Prosie from Archerfield via Rockhampton and Mackay Airports over the previous couple of days - see Blog post below!
Meanwhile, also on Thursday 28 October, AirServices Australia / Aero Pearl-operated Hawker Beechcraft B300 Super King Air VH-FIZ "Auscal 4" also called into Longreach Airport, arriving from Darwin and departing to Brisbane.
While Mission Aviation Fellowship (MAF) International Cessna 172s VH-MFQ and VH-WMC, along with Cessna 182 VH-WLX, together, departed Longreach Airport to Townsville. They appear to have been touring around Far North Queensland and the Northern Territory before returning back to Mareeba.
Finally, also on Thursday 28 October, Air Tractor AT-802A N8522Q flew up to Emerald from Brisbane.  It looked to arrive into Brisbane from overseas the previous day - possibly on delivery to a local operator.
And Gulf Coast Aviation Cessna 510 Citation Mustang bizjet VH-KXM flew from Mareeba and Dorunda (Maramie) to Emerald Airport where it appears to be staying for at least the night.
UPDATE!  On Friday 29 October, VH-KXM departed Emerald Airport for Clermont Aerodrome before it then departed back to Dorunda and Mareeba.
UPDATE!  On Saturday 30 October, VH-KXM departed Mareeba for Vanrook Station and Clermont Aerodrome before it then flew down to the Sunshine Coast.
Posted by Damian F at 8:43 PM