On Monday 4 October, and as it has done the previous couple of weeks, Brisbane-based FIFO Jet P/L Beech B200 King Air VH-FAQ was noted arriving into Rockhampton Airport from Archerfield.  It then departed Rockhampton Airport for the Labona Station Airstrip within Adani Australia's (Bravus Mining & Resources) Carmichael Coal Mine site.
VH-FAQ then later returned to Rockhampton Airport where it appears to be staying for at least the night.  It is expected to operate more flights to Labona over the next couple of days.
Meanwhile, also on Monday 4 October, FKG Air (Redjet Aviation) Hawker Beechcraft B200GT VH-FKB was noted visiting the Samuel Hill Airstrip within the Shoalwater Bay Training Area (SWBTA) from Toowoomba and Archerfield.  It later returned to these places.
While Brisbane-based Henty Aviation Cessna 425 Conquest 1 VH-BSM was back in the region again, landing at Biloela / Thangool Airport from Archerfield.  It later departed back there.
And Brisbane-registered Partenavia P.68B VH-PNU departed Rockhampton Airport for Archerfield.  It had arrived from there last Thursday 30 September. 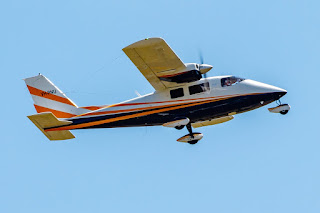