On Thursday 21 October, Royal Australian Air Force (RAAF) Boeing B737-7DT(BBJ) A36-002 was noted visiting a couple of Central Queensland Airports as it returned South from an overnight stay at Townsville.
It was again flying as "Envoy 17" and departed Townsville for Proserpine (Whitsunday Coast) Airport where it completed airwork before landing for a short time.  The BBJ then departed for Rockhampton Airport where it again complete airwork before landing. 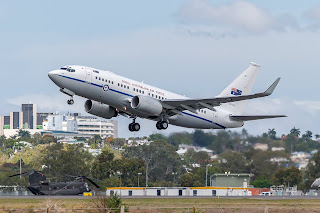 A36-002 "Envoy 17" was then spotted above as it departed Rockhampton Airport for Tamworth and then Canberra.

Meanwhile also on Thursday 21 October, Royal Australian Air Force (RAAF) Boeing C-17A Globemaster III A41-208 as "Stallion 64" departed RAAF Base Amberley and flew up via an inland route with fellow RAAF Airbus A330-200 / KC-30A Multi Role Tanker Transport (MRTT) A39-004 as "Dragon 41".
The Globemaster then separated and continued on to complete a missed approach at Mackay Airport before then flying up to Townsville.  The Globemaster later flew back to Amberley - while the KC-30 also returned to Amberley.