On Wednesday 20 October, Royal Australian Air Force (RAAF) Boeing B737-7DT(BBJ) A36-002 was spotted on the ground at Bundaberg Airport.  It looked to arrive from Canberra via Coffs Harbour on a training flight as "Envoy 17". 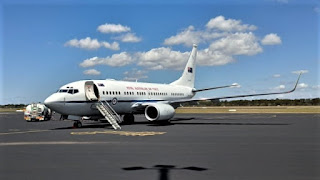 After some time on the ground, A36-002 departed Bundaberg Airport and continued up to land at Hamilton Island Airport for a short time.  The BBJ then flew up to complete a missed approach at Cairns before it then finished the day at Townsville..
It is assumed that A36-002 will fly back South - possibly via Proserpine (Whitsunday Coast) and Rockhampton Airports - on Thursday 21 October, as these training flights have done in the past.
UPDATE!  On Thursday 21 October, and indeed as predicted, A36-002 "Envoy 17" flew South from Townsville and completed a missed approach at Proserpine Airport before doing airwork and then landing at Rockhampton Airport.  It continued back to Canberra then via another missed approach at Tamworth.
Photo taken by Daniel Gorza  ©
Posted by Damian F at 10:10 PM