On Monday 18 October, Brisbane-based FIFO Jet P/L Beech B200 King Air VH-FAQ was noted arriving into Rockhampton Airport yet again from Archerfield. It was then spotted below as it departed Rockhampton Airport for the Labona Station Airstrip within Adani Australia's (Bravus Mining & Resources) Carmichael Coal Mine site. 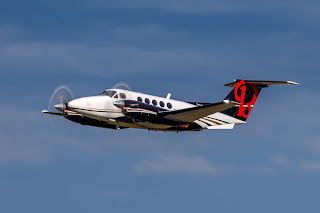 VH-FAQ then later returned to Rockhampton Airport where it appears to be staying for at least the night. It is expected to operate more flights to Labona over the next couple of days.

UPDATE!  On Tuesday 19 October, VH-FAQ operated a pair of flights between Rockhampton Airport and Labona.

UPDATE!  On Wednesday 20 October, VH-FAQ completed two more flights to Labona and back to Rocky before it then departed Rockhampton Airport for Archerfield.

Meanwhile, also on Monday 18 October,  the Queensland Police Service (Airwing) (State of Queensland) Raytheon B1900D VH-PSK flew down from Cairns and Townsville to Rockhampton Airport before it then continued down to Brisbane.  VH-PSK then landed at Mackay Airport before continuing back up to Cairns.

Finally, also on Monday 18 October, Avcair (Avgunn) LearJet 60 bizjet VH-ILJ was noted visiting Hamilton Island Airport during a busy day of flying.  It looked to arrive from and then later depart back to Brisbane.
Photo taken by Steve Vit  ©
Posted by Damian F at 9:11 PM