On Friday 22 October, Darwin-based Lloyd Aviation Jet Charter Dassault Falcon 900 bizjet VH-PPD was noted departing Hamilton Island Airport for Brisbane. It then completed the short hop down to the Gold Coast.
VH-PPD had arrived from these places on Tuesday 19 October.
Also noted visiting Hamilton Island Airport, also on Friday 22 October, was Ipswich-based Airborne P/L (Palm Lake Works) Pilatus PC-12/47E VH-PLE.  It arrived from and later departed back to the Gold Coast.
Meanwhile, also on Friday 22 October, Bowenville (near Toowoomba) based Cessna 525 CitationJet CJ1+ bizjet VH-JSZ flew into Rockhampton Airport from Archerfield and Miles Airports.  It then flew back down to Dalby and then Archerfield.
Finally, also on Friday 22 October, the Queensland Police Service (Airwing) (State of Queensland) Raytheon B1900D VH-PSK flew down from Cairns and Townsville to Hervey Bay (Fraser Coast) Airport.  It then flew up to Rockhampton Airport, before it then returned to Townsville and Cairns.
Of interest, VH-PSK 'diverted' to Hervey Bay Airport after being unable to land at Brisbane due to storms (and a tornado!).
And re-registered locally-based DeGunst Transport P/L Textron (Cessna) 208 Caravan VH-NPZ flew across from Charters Towers Aerodrome to Hamilton Island Airport and then down to Rockhampton Airport where it appears to be staying for the night.
UPDATE!  On Saturday 23 October, VH-NPZ was spotted below as it departed Rockhampton Airport for Bundaberg Airport and the Sunshine Coast. 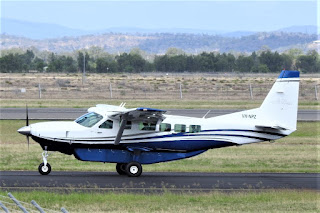 It seems to have just completed a closed tourist charter flight out to Western and Far North Queensland.
Photos taken by 'JM' and John Lee  ©
Posted by Damian F at 9:11 PM