On Saturday 9 October, Bowenville (near Toowoomba) based Cessna 525 CitationJet CJ1+ bizjet VH-JSZ was spotted soon after arrived into my local Clermont Aerodrome from Archerfield. 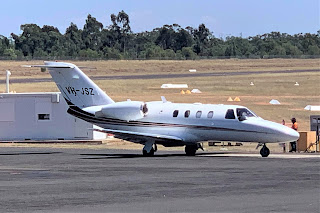 After taking on fuel, it then departed to Newcastle (Williamtown). VH-JSZ then returned to Archerfield.
This is about the second week in-a-row that VH-JSZ has visited little old Clermont!

Meanwhile, also on Saturday 9 October, Brisbane-based Teys Australia Cessna 525 Citation CJ2 bizjet VH-TEY departed Rockhampton Airport for Archerfield.  It had arrived into Rocky from there the previous day - as posted below!

Finally, also on Saturday 9 October, several Flight Training Adelaide (FTA) / Qantas Group Pilot Academy Diamond DA-40 Star training aircraft were noted visiting a couple of Central Queensland Airports before finishing the day at Rockhampton Airport.
VH-YNV, VH-YTK and VH-EQV all flew up from their Toowoomba-Wellcamp base to Bundaberg Airport before then continuing to Agnes Water Airport.  From there the three Diamonds continued up to Rockhampton Airport where they seem to be staying for the night.
A fourth DA-40 Star VH-YNW was due to also fly up from Agnes Water to Rockhampton Airport but looked to remain at Agnes Water possibly with a technical problem.
UPDATE!  On Sunday 10 October, all four DA-40 aircraft returned to Wellcamp, with VH-YNV and VH-YTK both flying via Emerald and Roma Airports, while VH-EQV joined them after a flight down to Agnes Water Airport and back to Rockhampton Airport.  VH-YNW returned Wellcamp direct from Agnes Water.
And as this post is being written, Colville Aviation Services Pilatus Britten-Norman BN2B-26 VH-ZOU is flying towards Emerald Airport from from Horn Island, Coen and Mareeba.  It is due to continue to the South-East corner of the state - possibly Watts Bridge - where it will undergo planned maintenance on Sunday 10 October.
Photo taken by Greg Weir  ©
Posted by Damian F at 9:28 PM