On Friday 1 October, Bowenville (near Toowoomba) based Cessna 525 CitationJet CJ1+ bizjet VH-JSZ was yet again back in Central Queensland, spotted by me arriving into my local Clermont Aerodrome from Archerfield. 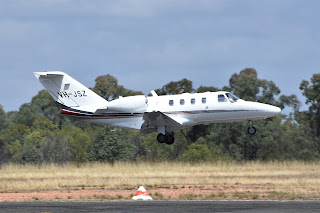 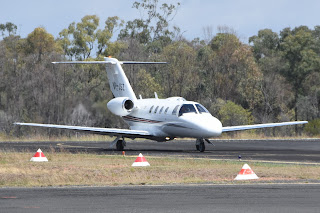 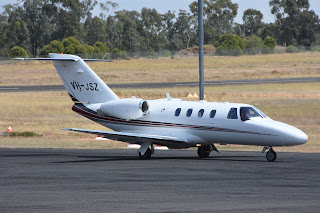 It then departed back down to Archerfield.

Meanwhile, also on Friday 1 October, Gulf Coast Aviation Cessna 510 Citation Mustang bizjet VH-KXM popped into Rockhampton Airport.  It looked to arrive from the Sunshine Coast before departing to Dorunda (Maramie) and Normanton.  It then returned to the Sunshine Coast.

Finally, also on Friday 1 October, the Queensland Police Service (Airwing) (State of Queensland) Raytheon B1900D VH-PSK flew down from Cairns and Townsville to Rockhampton Airport.  It then departed to Brisbane before returning North back to Townsville and Cairns.
And Hinterland Aviation Cessna 402C VH-TFK arrived into Hamilton Island Airport from Cairns and Lizard Island as 'HND637' before it then returned direct to Cairns.
Posted by Damian F at 9:32 PM