On Thursday 21 October, the often visiting American-registered Eclipse EA500 bizjet N257AK was noted departing the Whitsunday Airport at Shute Harbour for Archerfield.  It had arrived from there on Sunday 17 October. 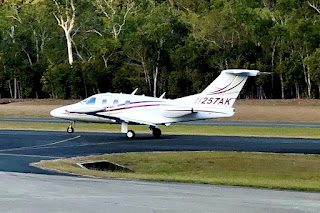 As reported previously, N257AK looks to arrive each Sunday or Monday and depart the Whitsundays each Thursday.
While after arriving from there two days earlier, Stroud Aviation and Transportation (Boonah) Cessna 510 Citation Mustang bizjet VH-SHI departed Proserpine (Whitsunday Coast) Airport for Archerfield, also on Thursday 21 October.
And Brisbane-based Teys Australia Cessna 525 Citation CJ2 bizjet VH-TEY flew down from Townsville to Mackay Airport, also on Thursday 21 October.  It then flew down to Brisbane and Archerfield.
As mentioned, VH-TEY popped into Maryborough Airport on Wednesday 20 October while heading North.
Meanwhile, also visiting Mackay Airport, also on Thursday 21 October, was BPW Aviation / Airspeed Aviation Beech 58 Baron VH-SQC which flew up from Tamworth via Rockhampton Airport.  It then departed to Archerfield.
UPDATE!  On Friday 22 October, VH-SQC flew back up to Mackay Airport from Archerfield before then returning there and continuing to Tamworth.
Pilatus PC-12/45 VH-PID also arrived into Rockhampton Airport from Taroom before then returning to Toowoomba.  It had flown North via Rockhampton Airport over the previous two days.
While Airflite / Commonwealth of Australia (Cadets Branch - Air Force) Diamond DA 40 NG Star VH-UEZ visited Bundaberg Airport from its RAAF Base Amberley 'home' as "Astra 203'.
The Australian Air Force Cadets (AAFC) took delivery of a fleet of powered aircraft in 2019 with the Royal Australian Air Force providing eight new build Diamond DA-40 NG aircraft to support safer, more advanced training for Cadets.
The aircraft entered into operations in the first half of 2019 and based at RAAF Base Amberley in Queensland, RAAF Base Richmond in New South Wales and RAAF Base Point Cook in Victoria, and will also operate to regional airfields across the country.
And late on Wednesday 20 October, Air Tractor AT-802A N4501C flew across from Majuro to Brisbane before then flying up to Bundaberg Airport where it appears to have stayed.