On Sunday 3 October, Virgin Australia Boeing B737-800 VH-YQG was noted making its first visit to Central Queensland, spotted at Proserpine (Whitsunday Coast) Airport after arriving as VOZ1117 from Brisbane. It then departed back to Brisbane from Proserpine Airport but as VOZ1118. 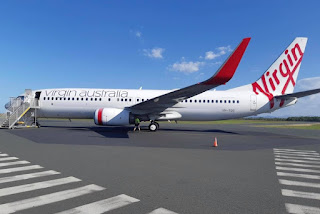 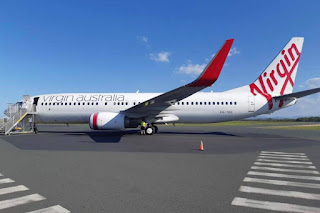 This was the first time that the recently (re-)delivered aircraft has visited Central Queensland since it was returned to Australia in early July.

The B737-800 was previously operated by Virgin Australia as VH-YFG and was one of five aircraft that were re-registered and ferried back to lessors in the USA in 2020. VH-YFG took up the registration marking 2-VYFG and ferried out of Australia in mid-September 2020.

On Wednesday 7 July, 2-VYFG arrived back in Australia from the USA and promptly took up the registration marking of VH-YQG. It re-entered service with Virgin Australia on Monday 23 August.

Of interest, it appears that VH-YQG is still named 'Hanson Bay'.

Meanwhile, it's worth mentioning that Virgin Australia are to take delivery of a further nine B737-800 aircraft in the coming months, with the airline reportedly aiming to have 77 aircraft in its fleet by March 2022. This is just shy of the total number of planes in the fleet when Virgin Australia went into voluntary administration in 2020.
Two of the aircraft were previously operated by the airline - VH-VUI (ex N341CG) which recently arrived back into Australia via Brisbane (pictured below) and VH-VUJ (ex N343CG). 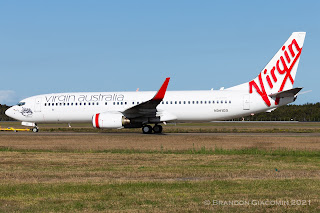 And Virgin Australia will also take delivery of seven former SilkAir B737-800 aircraft.  With SilkAir now merged with parent airline, Singapore Airlines, these aircraft were deemed surplus to requirements. SilkAir moved to dispose of the planes earlier this year.  It is reported these aircraft are 9V-MGF, 9V-MGG, 9V-MGH, 9V-MGI, 9V-MGJ, 9V-MGP, and 9V-MGQ.
9V-MGI was delivered to Virgin Australia in Brisbane on Tuesday 21 September with it promptly placed on the Australian Aircraft Register as VH-IWQ.  It ferried to Townsville (pictured below) on Sunday 26 September for re-painting and returned to Brisbane on Sunday 3 October looking resplendent in the Virgin Australia livery (also pictured below). 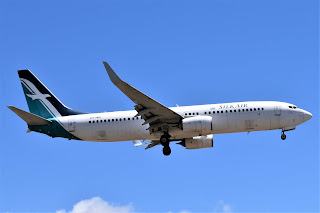 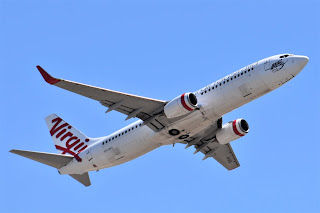