On Sunday 10 October, another recently delivered Cessna 208B Grand Caravan VH-TFB was noted visiting some Central Queensland Airports only days after it entered service with Seair Pacific / Istlecote from the Gold Coast. 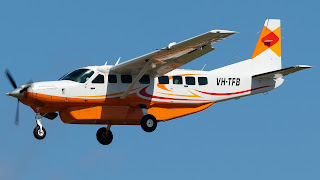 It looks to be currently based at Hervey Bay (Fraser Coast) Airport and departed there for Bundaberg Airport then Lady Elliot Island before then returning back there again via Bundy.
VH-TFB looks to have flown up from the Gold Coast via Redcliffe at the end of the week with its first day of operation with Seair on Friday 8 October.
VH-TFB looked to arrive into the Gold Coast from Melbourne (Essendon) in mid-September (as pictured above) having arrived there as N561PE in February.  We reported below that N561PE was possibly on delivery to Hardy Aviation in the Northern Territory but perhaps this didn't happen.

Meanwhile, also on Sunday 10 October, Seair's other recently acquired Caravan - Textron Aviation (Cessna) 208B Caravan VH-TQI - was noted flying across from Longreach Airport to a low-pass over Rockhampton before it then continued towards Heron Island and then Lady Elliot Island.
VH-TQI looked to fly West from the Gold Coast to Charleville Airport and ports further on Friday 8 October - perhaps on a closed charter flight.
Photo taken by Brodie Lawson  ©
Posted by Damian F at 10:31 PM