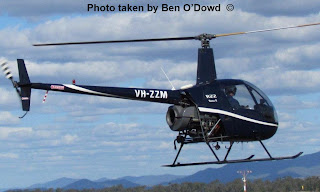 The ATSB reports that:  "... the pilot was undergoing training for mustering approval by a supervising pilot, and, after completing about 7 hours of mustering, the helicopter was returning to a location near Dingo, when about 1,000ft above ground level (AGL) the supervising pilot instructed the pilot to conduct a practice autorotation  turning through 180°, which the pilot completed, increasing power when at about 5ft AGL."


The helicopter landed hard, bounced once and rotated through about 180° before coming to rest. The pilot sustained serious injuries and the supervising pilot minor injuries. The helicopter was substantially damaged.  The ATSB report concludes by stating that:  "This incident highlights the importance of good communication between a flight instructor and their student and the use of handover/takeover techniques to clarify who has control of the aircraft at any time."