A spectacular day of plane spotting action at Hervey Bay (Fraser Coast) Airport on Saturday 7 February with a lovely selection of interesting visitors to call in - along with the usual commercial traffic.

The action actually started before dawn with Alliance Airlines Fokker F-70 VH-JFE touching down from Brisbane as UTY560.  Presumably on a charter flight, VH-JFE then departed to Sydney as UTY561.  VH-JFE then returned to Hervey Bay during the middle of the afternoon, flying back from Sydney as UTY562, before finally flying on to Brisbane as UTY563.

Also at Hervey Bay during the morning on Saturday 7 February, Royal Australian Air Force (RAAF) Boeing B737-7DT(BBJ) A36-001 called in from Townsville as "Envoy 40".  It looked to depart further to the South - presumably to Canberra. 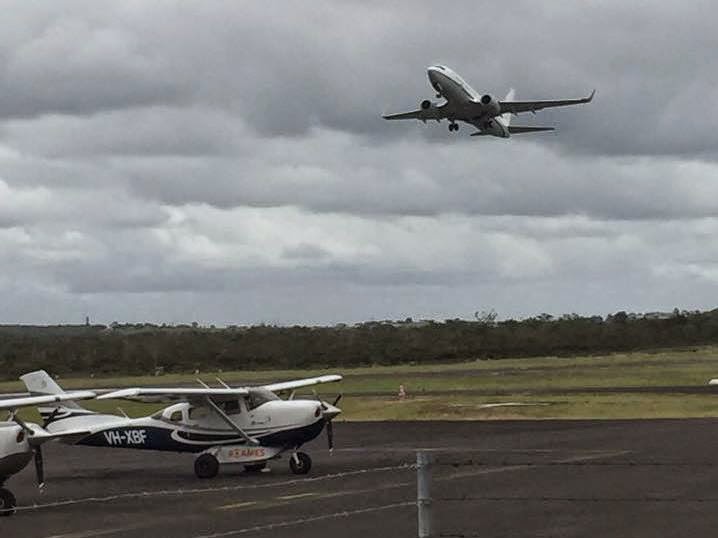 As shown in the photo above, Australasian Jet-operated (AusJet) Cessna 206 aircraft VH-XBF and VH-FEN also arrived at Hervey Bay from Rockhampton on Saturday 7 February.  The two Cessnas had positioned to Rocky from Emerald on Friday 6 February.  They are operated by AusJet on aerial surveys in support of Ergon Energy’s Remote Observation Automated Modelling Economic Simulation (ROAMES) project and have operated at Longreach and Clermont in recent weeks as shown in this Blog post HERE.

It's also worth noting that for the second consecutive Saturday, a QantasLink Dash-8-Q400 operated into Hervey Bay - operating as QLK2094/2095 - from and back to Sydney, instead of the usual Cobham Aviation-operated Boeing B717-200.