On Wednesday 6 March, a nice pair of Chinese-registered bizjets were noted arriving into Hamilton Island Airport.  Both arrived from Cairns where they completed Customs and Border Security obligations having earlier flown in from China.

The first to touch down on Hamo from Cairns was TAG Aviation (Asia) Bombardier BD-700-1A11 Global 5000 B-KMF.  It had originally arrived into Cairns from its Beijing (Capital) Airport base and was heard to use the flight number and radio callsign of 'TBJ20' / "Tagjet 20". 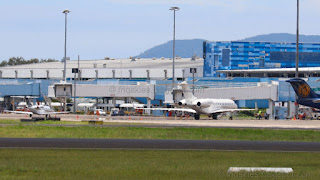 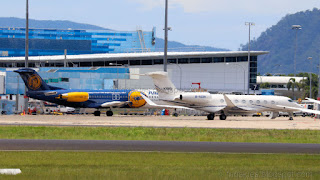 At the time of writing, both lovely bizjets appear to be staying at Hamilton Island Airport for at least the night.

Thanks to the fantastic FNQ Skies Blog for allowing us to share their great photos of these great visitors to CQ when they passed through Cairns!