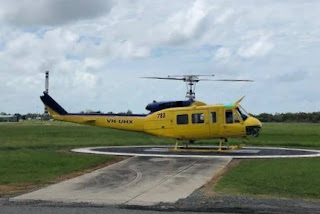 It was noted passing through Rockhampton Airport, arriving from the South, before being later photographed at Mackay Airport.  VH-UHX then continued to Townsville and Cairns where it is believed to be heading to operate with Great Barrier Reef Helicopters (GBR Helicopters).

VH-UHX was heard to be using the radio callsign of "Helitack 283".