Certainly a nice bizjet to once again visit Hamilton Island Airport on Sunday 31 March was American registered Bombardier BD-700-1A11 Global 5000 N2QE.  The sleek bizjet is pictured below departing Brisbane for Hamo having arrived in the Queensland capital from overseas the previous day. 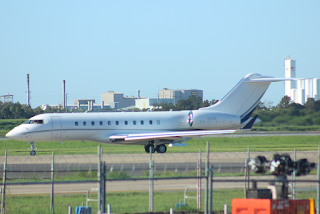 N2QE has visited Hamilton Island Airport during previous visits to Australia including just over a year ago in early March 2018.

On this occasion, after a few hours on the ground, it appears that N2QE departed Hamo for Sydney.

Finally, also late on Sunday 31 March, Graham Aviation (Cairns) Cessna 510 Citation Mustang VH-FNI was noted arriving into Rockhampton Airport from its Mareeba base via Cairns.  After taking on fuel, VH-FNI then departed to the Sunshine Coast, Archerfield and Bankstown.