On Friday 8 March, AirMed Australia Cessna 510 Citation Mustang bizjet VH-NEQ was photographed by me on the ground at Emerald Airport.  It had earlier arrived from Darwin after it arrived there from Bankstown via Mount Isa the previous day. 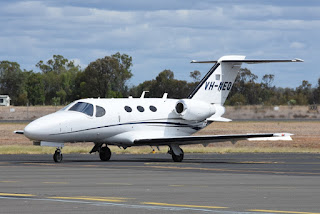 After taking on fuel, VH-NEQ departed to Archerfield.  It then continued to Coffs Harbour and Newcastle (Williamtown) before finally arriving back at its Bankstown base. 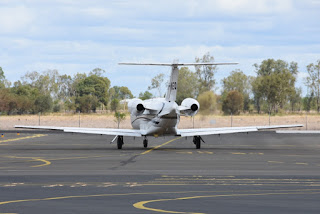 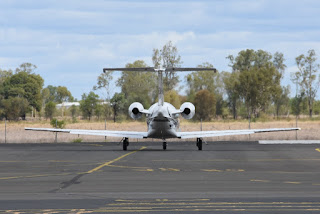 VH-NEQ was heard to be using the radio callsign of "AirMed 210".

Meanwhile, over at Bundaberg Airport, also on Friday 8 March, Isle of Man-registered but Australian-based Piaggio P-180 Avanti II M-ETAL was back once again.  This time it arrived from its Coffs Harbour base and departed to Adelaide and then Sydney.
Posted by Damian F at 7:41 PM