On Saturday 9 March, Australian Army Boeing CH-47F 'Foxtrot' Chinook helicopters A15-302 and A15-304 were noted passing through Rockhampton Airport.  Both Chinooks - along with A15-301 which passed through Rocky yesterday - were all returning to Townsville following their participation in the Australian International Airshow at Avalon Airport. 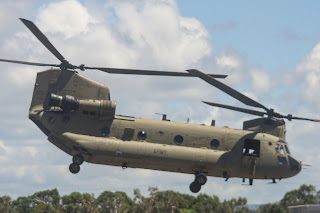 First to visit was A15-304 which was heard to be flying as "Madcow 379" and was noted arriving into Rocky from the South.  After taking on fuel, it departed to Townsville.

Then A15-302 arrived from the Sunshine Coast (where it is photographed above) flying as "Brahman 307".  After taking on fuel, it too departed to Townsville.

As mentioned below, both Chinooks A15-302 and A15-304 participated in the airborne displays and Australian Defence Force (ADF) Showcase during the Australian International Airshow at Avalon Airport.


Sincere thanks to the Sunshine Coast Plane Spotting Facebook page for allowing us to share their great photo of the departing Chinook!
Posted by Damian F at 7:20 PM