On Wednesday 27 February, RACQ Central Queensland Rescue (CQ Rescue) (Babcock Mission Critical Services Australasia) Bell 412 VH-LSY was photographed by me as it approached Clermont Hospital following a flight out from its Mackay Airport base as "Rescue 422". 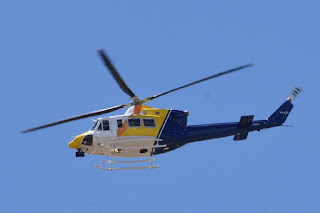 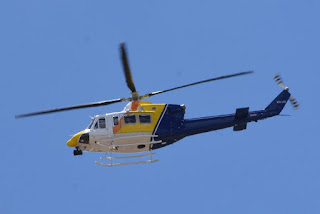 VH-LSY has only just returned to Mackay Airport following maintenance in Coffs Harbour in New South Wales.  It was noted ferrying into Mackay Airport from Coffs via the Sunshine Coast and Rockhampton Airport on Saturday 23 February.  The mission to Clermont was the choppers first since returning.

VH-LSY had been in maintenance since September last year and has reportedly received an engine and systems overhaul and had new panels and paint applied as shown in the photos above.  The helicopter has also now since had the CQ Rescue sponsors' stickers also applied while in the hangar at Mackay Airport.

To find out more about this vital community rescue service, or to donate to keep the rescue choppers in the air, visit the CQ Rescue website:  https://cqrescue.org.au/
Posted by Damian F at 3:46 PM