It was noted operating as "Rescue 521" and has initially departed Townsville Airport for Collinsville before flying to Mackay Base Hospital.  VH-ESH then flew across to Mackay Airport to refuel before it then returned to Townsville. 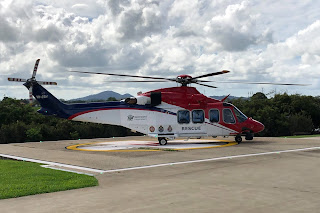 The Agusta has been operating out of Townsville Airport since January and has also been noted completing medical evacuation flights into both Hamilton Island Airport and Proserpine Hospital in recent weeks.