Where are they now?

As you’ve seen, I am fascinated in the history of aircraft so thought I’d share some more of the interesting history of one particular airframe we’ve seen here in Central Queensland in past years in a semi-regular Blog post called 'Where are they now?'.

The first ever aircraft operated under Virgin brand here in Australia with Sir Richard Branson and then-CEO Brett Godfrey at the helm was Boeing B737-400 VH-VGA. 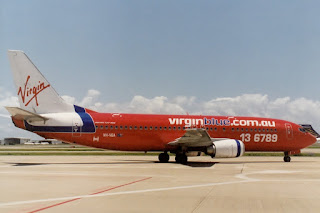 Designated as a B737-43Q (c/n 28489), the airframe rolled off the production line in 1996 and initially spent time operating with China Airlines in Taiwan before being transferred to Virgin Express Ireland as EI-TVA.  It wore this livery and registration when it arrived in Australia on delivery to Virgin Blue in June 2000 but soon after, was placed on the Australian Aircraft Register as VH-VGA and name ‘Blue Belle’.

VH-VGA operating the inaugural Virgin Blue service on Thursday 7 September 2000 and remained with the airline until 2002 when it was transferred back to Europe and Virgin Express Belgium.

Since then, the airframe continued to operate in Belgium with Brussels Airlines (which merged in part with Virgin Express) before it then operated for the Polish airline Enter Air from 2012.  It was then converted to a freighter aircraft in the USA in 2017 and is now operating with Bulgarian cargo airline Cargo Air as LZ-CGX since March 2018.  LZ-CGX was photographed by Jan-Arwed Richter in July 2018.


Do have any other information on or photos of aircraft that operated in CQ (or even Australia) that are still flying somewhere in the world?  Please share on our Facebook page!!
Posted by Damian F at 9:00 AM