On Wednesday 27 March, QantasLink Dash-8-Q400 VH-QOU was photographed at Mackay Airport after it became the latest of the 'classic' Dash-8-Q400 aircraft to emerge from the Flying Colours paint-shop at Townsville in the new Qantas 'Silver-Roo' colour scheme. 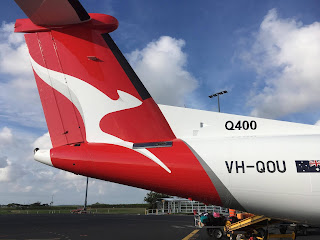 It had emerged from the paint-shop on Monday 25 March and has subsequently called into Mackay and Rockhampton Airports in the days since.

On Wednesday, it was photographed soon after arriving into Mackay Airport as QLK2302 from Rockhampton Airport.

As shown, VH-QOU has now been named 'Port Campbell' having been previously un-named since it arrived into Australia and entered service in late 2009. 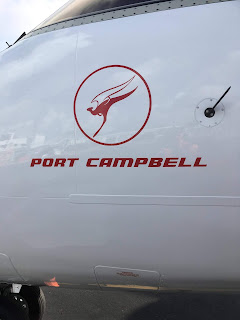 As mentioned, VH-QOU joins several other Dash-8-Q400s in the new and updated Qantas livery and kangaroo logo, which was introduced to coincide with the introduction the Boeing B787 Dreamliner into service with the airline in 2017.  They are becoming quite a common sight at most Central Queensland Airports.

We will wait to see what emerges from the Flying Colours paint-shop next!