It was a big day on the Federal election campaign trail on Thursday 9 May with multiple Royal Australian Air Force (RAAF) 34 Squadron VIP and other aircraft photographed and noted at CQ Airports.

During the morning, RAAF Canadair CL-600-2B16 Challenger 604 bizjet A37-002 "Wisdom 94" was noted arriving into Gladstone Airport from Brisbane.  It then departed to Mackay Airport where it was photographed below. 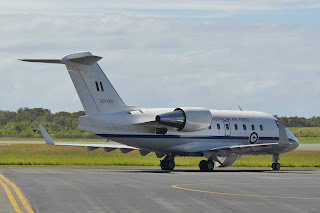 During the early part of the afternoon, A37-002 then departed to Townsville and it is expected to depart to Wagga Wagga later in the evening.

RAAF Beech B350 Super King Air A32-651 "Regent 91" was noted also arriving into Gladstone Airport but from RAAF Base East Sale via Melbourne (Tullamarine) in Victoria.  It then made the short hop up to Rockhampton Airport where it remains parked.

Fellow RAAF Super King Air A32-439 "Consort 95" was noted arriving into Roma Airport also from RAAF Base East Sale.  It then departed to Townsville.

Then during the later afternoon, RAAF Boeing B737-7DT(BBJ) A36-001 "Envoy 77" brought Australian Prime Minster Scott Morrison to Rockhampton Airport.  It in flew from Canberra via Port Macquarie in New South Wales. 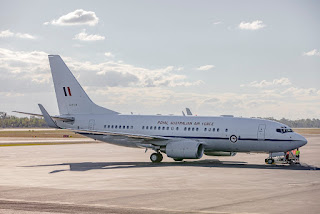 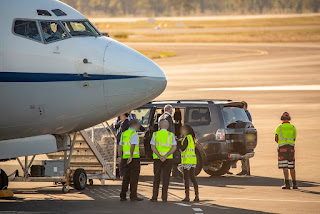 As reported previously, the RAAF BBJ was followed by Alliance Airlines Fokker F-70 VH-JFE "Envoy 40" which has been chartered to by the RAAF to transport media around the campaign trail.

As posted below, A37-003 visited Rockhampton Airport on Wednesday 8 May and was photographed above arriving into Brisbane.  It then flew to Temora where it spent the night.


At the time of writing, A37-003 looked to be preparing to depart Rockhampton Airport for Townsville.

Finally, of interest, the Federal Labor Leader Bill Shorten was noted arriving into Cairns during the late afternoon also on Thursday 9 May in RAAF Boeing B737-7DT(BBJ) A36-001 "Envoy 96" from Canberra and Brisbane.  It was trailed by Alliance Airlines Fokker F-70 VH-QQX "Envoy 50" which had the media on board.

Photos taken by 'JM' and Russell Prothero  ©
Posted by Damian F at 7:19 PM