After dark on Sunday 12 May, Royal Australian Air Force (RAAF) Boeing C-17A Globemaster III A41-210 was photographed on the ground at Rockhampton Airport soon after arriving as "Stallion 17" directly from Darwin. 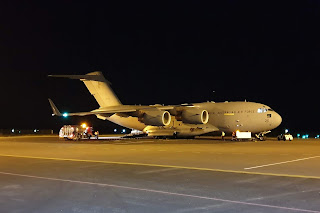 It looks to have brought a load of American troops and equipment with word coming from the Airport that they are in town for an Exercise in the nearby Shoalwater Bay Training Area (SWBTA). 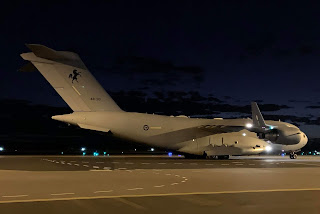 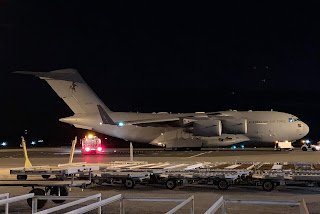 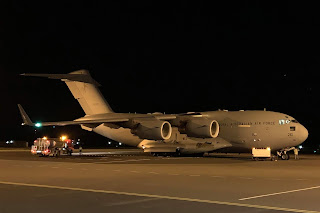 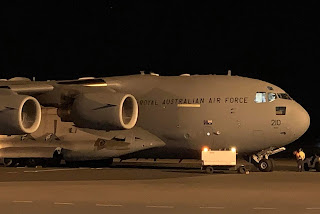 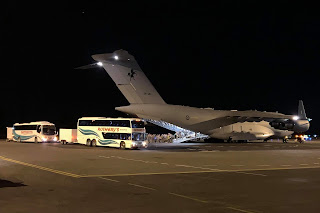 Of course, this Exercise comes weeks before the start of the joint military Exercise Talisman Sabre 2019 (TS19) which is will take place at various locations along the East Coast of Australia - including within the Shoalwater Bay Training Area - during July this year.

Meanwhile, back at Rockhampton Airport, A41-210 looked to be closed up and staying for the night with an unconfirmed report suggesting that it will depart during the latter part of the morning on Monday 13 May.

Stay tuned for the latest updates!

Sincere thanks to local plane spotters Jason M and Kayanne H who were two of many on hand to see the might C-17 Globemaster arrive into the beef capital!

Photos and video taken by Jason Miller and Kayanne Hardsmann  ©
Posted by Damian F at 9:44 PM