On Wednesday 8 May, Royal Australian Air Force (RAAF) Canadair CL-600-2B16 Challenger 604 bizjet A37-001 was back in Central Queensland for the third consecutive day, again noted visiting Rockhampton Airport. On this occasion, it arrived from Canberra and Parkes in New South Wales. 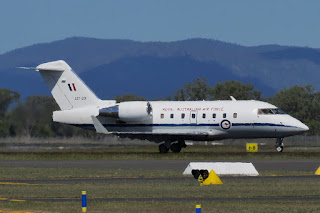 After a couple of hours on the ground, A37-001 was photographed (above) as it departed Rockhampton Airport for Adelaide.

If interest, A37-001 had departed Rockhampton Airport for Parkes, Brisbane and Canberra on Tuesday 7 May - see Blog post below.

Meanwhile, later on Wednesday 8 May, fellow Canadair CL-600-2B16 Challenger 604 bizjet A37-003 was noted also visiting Rockhampton Airport. It arrived from Canberra and later departed to Brisbane.

It appears that the local seat of Capricornia could be a crucial one for this upcoming Federal election with it assume that both RAAF Challengers brought politicians to join the local campaign trail.