On Thursday 9 May, American-registered (but possibly Australian-based??) SOCATA TBM 700 N700RU was noted arriving into the Whitsunday Airport at Shute Harbour from Archerfield. 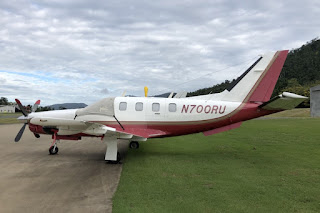 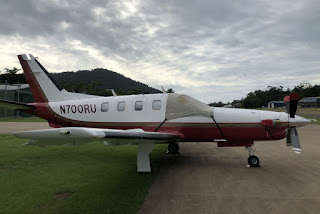 The American-registered TBM 700 looked to originally arrive in the South-East corner of the state in October 2018 and has since been based out of Archerfield.

It remains parked at Shute and was photographed resting quietly on Friday 10 May - seemingly preparing for a weekend stay!

It has perhaps 'replaced' another American-registered but Brisbane-based SOCATA TBM 700 N700BK which was placed on the Australian aircraft register as VH-PGA to Hewitt Cattle Australia in April this year.  It spent some time in the hangar at the Gold Coast (as pictured) before relocating perhaps back to Archerfield where it appears to be based once again. 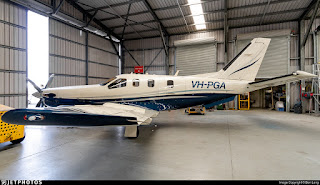 Of interest, VH-PGA made its first visit to CQ at Moura Airport this week, arriving from Archerfield late on Wednesday 8 May.  It returned to Archerfield on Thursday 9 May.
Posted by Damian F at 9:00 AM