On Monday 6 May, Australian Corporate Jet Centres Bombardier CL-600-2B16 Challenger 604 bizjet VH-SCR was noted arriving into Mackay Airport from Townsville as "Regent 51”. It was earlier photographed arriving into Townsville from Cairns having arrived there from Sydney the previous evening. 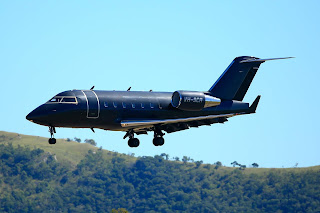 As mentioned previously, the sleek Challenger has been chartered by the Royal Australian Air Force (RAAF) and is being used to ferry Federal politicians around Australia - and in particular National Party Leader and Deputy Prime Minister Michael McCormack - during this Federal election campaign.

At the time of writing, VH-SCR appears to be spending the night at Mackay Airport.