On Tuesday 21 May, the Royal Australian Air Force (RAAF) Search and Rescue (SAR) Bell 412EP helicopter VH-VAB "Rescue 82" was photographed coming in for a landing on the Rockhampton Base Hospital heli-pad. 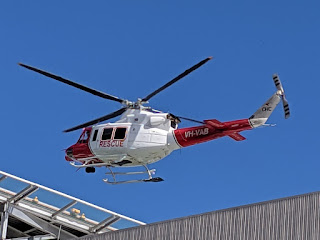 I've been told that VH-VAB "Rescue 82" becomes the 13th rescue helicopter to land at the 'new' Rockhampton Base Hospital heli-pad.

At the time of writing, it is unclear if VH-VAB "Rescue 82" was completing a training flight or its first medical evacuation flight from Shoalwater Bay during its deployment in support of Exercise Southern Jackaroo which started this week.

UPDATE!  We have since learned that it may have completed a medical evacuation flight from Shoalwater Bay - our thoughts are with the injured member.

Thanks to local plane spotter Gordon C for the pic!