Another day, and another pair of Ospreys to visit Rockhampton!

On Thursday 30 May, it appears that the same United States Marine Corps (USMC) Bell Boeing MV-22B Osprey tiltrotor aircraft completed two more visits into the Australian Army District Support Unit (DSU) compound nearby to Rockhampton Airport.  The two Ospreys that visited Rockhampton on these two occasions were identified as 168028 / YZ-07 and 168244 / YZ-00 - the latter believed to be making its first visit to the beef capital during its deployment to Townsville and Central Queensland. 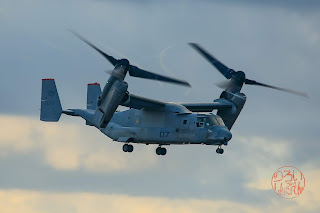 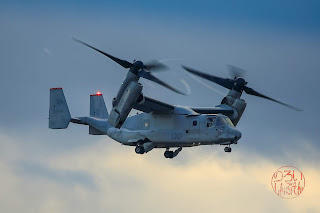 It also appears that during its morning visit, Osprey 168244 / YZ-00 sparked a grass fire inside the DSU which was captured on this dramatic video.


Of interest, for the morning visit, Ospreys 168028 / YZ-07 and 168244 / YZ-00 flew down as "Skytrain 14" from Townsville and were refuelled at the DSU before returning to Townsville via Shoalwater Bay.  They did the same in the afternoon but as "Skytrain 16".