On Friday 10 May, the recently delivered Royal Australian Air Force (RAAF) Dassault Falcon 7X bizjet A56-001 was back in Central Queensland on what appeared to be another crew familiarisation / training flight. 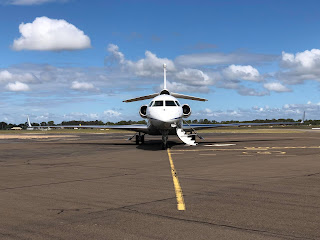 A56-001 was flying as "Regent 47" and flew up from Canberra via airwork at Coffs Harbour before landing for a short time at Bundaberg Airport. 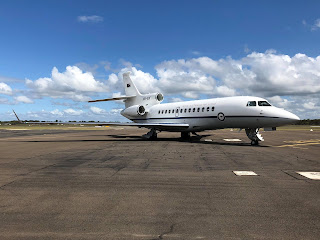 After departing Bundy, A56-001 continued up to Hamilton Island Airport where it again landed for a short time.

The Falcon then departed up to Cairns where it completed more airwork before returning South and landing at Townsville where it appears to be staying for the night.

As mentioned previously, Of interest A56-001 is the first of three leased Dassault Falcon 7X bizjets acquired to replace the three Canadair Challenger 604 bizjets currently operated by 34 Squadron.  A56-001 arrived in Canberra from overseas in mid-April.

Meanwhile, late on Thursday 9 May, Australian Army NH Industries MRH-90 Multi-Role Helicopter A40-023 was noted visiting Proserpine (Whitsunday Coast) Airport as "Destrier 117". It flew down from and later returned to its Townsville base.

Of interest fellow MRH-90 helicopter A40-041 "Destrier 127" was noted flying around Townsville at about the same time.