On Monday 20 May, no less than six Royal Australian Air Force (RAAF) Beech B350 Super King Air turboprop aircraft were noted passing through Roma Airport for fuel while all on flights from their home at RAAF Base East Sale in Victoria to Townsville and Cairns in Far North Queensland. 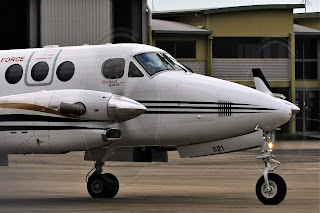 A32-439 flying as "Beaufort 01" passed through Roma Airport and headed to Townsville. 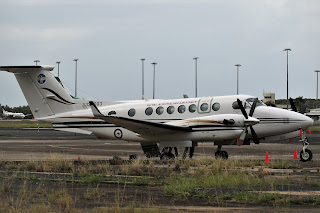 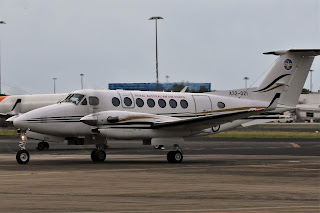 It is unclear why there was this mass movement of Super King Airs - the five that arrived into Cairns were noted parked outside the local Hawker Pacific hangar so perhaps they are in town there for some maintenance?

UPDATE!  On Tuesday 21 May, it appears that at least two of the five Super King Airs at Cairns took the air while the others remained parked.

Meanwhile, also on Monday 20 May, Royal Australian Air Force (RAAF) Alenia C-27J Spartan transport aircraft A34-009 flying as "Wallaby 43" flew up from RAAF Base Amberley to Hervey Bay (Fraser Coast) Airport where it was noted completing a missed approach.  It then flew across to Maryborough Airport for another missed approach before heading back to Amberley via more airwork in the Kingaroy area.

Sincere thanks to Cairns-based plane spotter Jonathan W for allowing us to share his great photos!

All photos taken by Jonathan Williams  ©
Posted by Damian F at 10:27 PM