On Friday 24 May, Royal Australian Air Force (RAAF) Boeing C-17A Globemaster III A41-212 was spotted completing a missed approach and overshoot from Runway 15 at Rockhampton Airport. 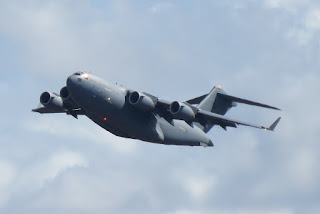 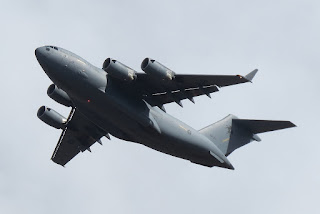 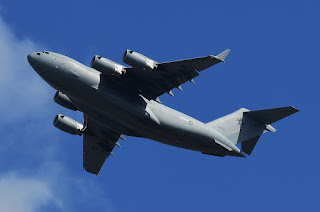 The Globemaster has a busy day with it looking to depart its 'home' at RAAF Base Amberley for airwork at Hamilton Island Airport before it flew down to Rocky.  From Rockhampton, A41-212 then looked to fly back North to Cairns via more airwork at Mackay Airport.  It was also eventually heard departing Townsville for yet more airwork at Proserpine (Whitsunday Coast) Airport before heading back to Amberley.

Meanwhile, another RAAF aircraft - albeit slightly smaller - also completing airwork and aerial surveys around parts of CQ also on Friday 24 May was Beech B350 Super King Air A32-439.  It was flying as "Beaufort 01" and looked to depart Townsville and complete airwork high above Rockhampton before returning to Townsville.

UPDATE!  On Monday 27 May, A32-439 "Beaufort 01" was back in the air above Rockhampton and surrounds completing another aerial survey flight.  It also landed at Rockhampton Airport for a short time.