A series interesting freight flights was completed over the weekend by Toll Freight Metro 23 VH-HPE.  Reports suggest that the flights delivered and collected ballot papers for the Federal election which was held over the weekend. 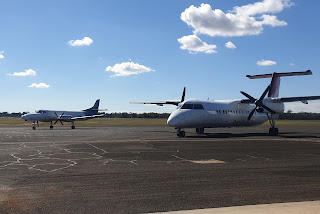 After positioning from Brisbane to Winton late the previous evening, on Saturday 18 May, VH-HPE was noted departing Winton and calling into Longreach, Blackall, Charleville (as shown) and Cunnamulla before finishing the day at the Toowoomba Wellcamp Airport.

Then on Sunday 19 May, VH-HPE departed Wellcamp and visited Winton, Longreach, Barcaldine, Charleville, Cunnamulla and Saint George before returning to Wellcamp.  VH-HPE then positioned back to Brisbane.

Of interest, fellow Toll Freight Metro 23 VH-UZN was noted completing flights out of Cairns Airport also in support of the Federal election with it noted completing a flight to and from Horn Island.

Finally, it's also worth nothing that also in Saturday 18 May, FlightTech Air Logistics / Townsville Airlines AeroCommander 500-S VH-WZQ also popped into Longreach Airport.  It was noted arriving from its Cairns base and later departed to Swan Hill and Ballarat in Victoria.